Gaining exposure to Bitcoin can be achieved through a variety of trading vehicles. Derivatives, while going through a surge in popularity over the past few months, is seemingly losing traction all of a sudden.

It is only normal to see some ups and downs in trading patterns every now and then. More often than not, the market volume is determined by the underlying asset’s price. Bitcoin hasn’t seen much exciting action since May of 2020, which could explain why derivatives are of less interest all of a sudden.

To put this in perspective, overall derivatives trading has been on a tear since October 2019. All participants noted strong increases in volumes up until March 2020. Following the halving, there was a brief dip in April, followed by strong gains in May.

Keeping all of this in mind, no one expected June to be worse than April. Its overall volume has dropped well below $450 billion. Not the trend anyone expected, but it seems this is affecting all market participants equally.

A Trend Across the Board

With so many derivatives providers, one would expect some companies to stand out. When the volume is growing, OKEx and Huobi seem to receive the most attention. Binance is also doing its part, although the overall market share appears to be shrinking again. 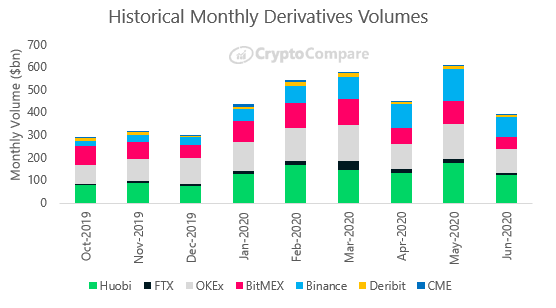 The ones not seeing that much volume are FTX, BitMEX, Deribit, and CME. This latter part is relatively surprising. Convincing institutional investors to enter the Bitcoin market remains an ongoing challenge. Even derivatives don’t seem to appease them all that much.

Contrary to the trend affecting the derivatives market, spot trading remains relatively popular. It has always been generating more volume than derivatives, and that trend is not slowing down yet. Looking at the comparison for monthly volume, spot trading generates up to three times as much liquidity. 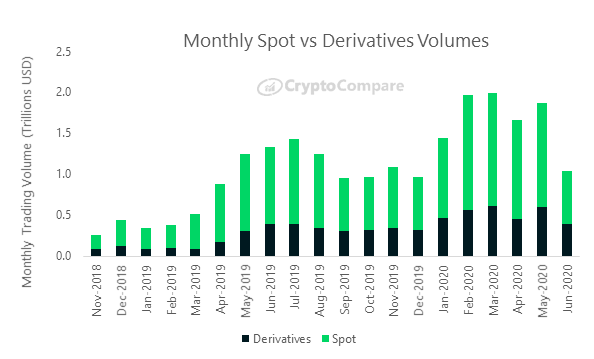 Even so, the spot trading volume for June 2020 is abysmal. It is on par with December 2019, which isn’t necessarily a good thing. Until Bitcoin shows some real signs of movement, instead of this sideways action, these volume figures may not improve all that much.